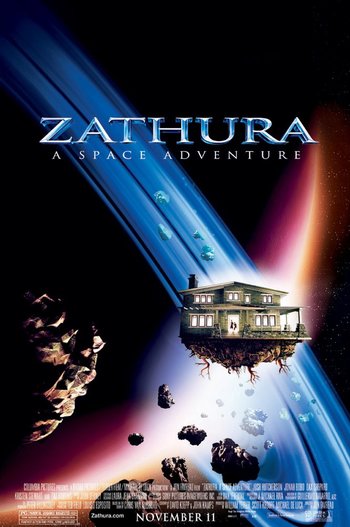 Working Title: Jumanji in Space.
"Attention, space adventurers. Zathura awaits. Do you have what it takes to navigate the galaxy? It's not for the faint of heart. For once you embark upon your journey, there's no turning back until Zathura's reached."
Advertisement:

Zathura is a 2005 fantasy film directed by Jon Favreau. The plot is adapted from the book Zathura written by Chris Van Allsburg, who also wrote Jumanji. However, unlike the book, the film serves as a Spiritual Successor rather than a direct sequel, only sharing the basic "board game comes to life" premise.

Two brothers, Walter (Josh Hutcherson) and Danny (Jonah Bobo) discover an old board game in the basement of their father's house: the sci-fi-based Zathura. When they start playing, the entire house, including them and their sister, is transported into the world of the game. Despite their ongoing rivalry, Walter and Danny find they must work together if they're ever going to beat the game and get back home.

Much like its predecessor, the film heaped on plenty of details that weren't in the original 32-pager, such as adding Lisa, Walter and Danny's older sister, and a mysterious astronaut who becomes a gruff mentor to the boys. Excluding voice actors or people wearing alien costumes which cover their whole bodies, the film has a cast of exactly five, one of whom's total time makes up about ten minutes at the most, and another who is in cryogenic stasis for about half of the film. There are no extras, crowd shots, or other group scenes, and the movie takes place almost entirely in a single house.

"Pieces reset at the end of each game. Play again and again for different adventures."