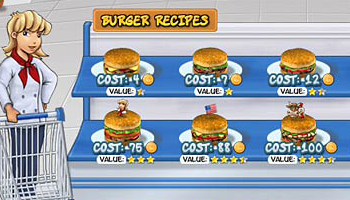 It's called Burger Rush. What did you expect, pancakes?
A character — frequently male — who is only able to make one specific kind of food, often because they're a Lethal Chef and attempts to diversify their efforts would end in disaster. Through harsh training, they have finally become able to make one thing that is edible, at least. If it's their Trademark Favorite Food, they're in luck. Sometimes their specialty dish is widely praised as being transcendentally delicious... they just can't transfer that skill to anything else.
Advertisement:

Sometimes Truth in Television — it's relatively common for people who aren't particularly good at cooking (even if they're not quite at Lethal Chef levels) to be able to make a few dishes fairly well. This trope lies somewhere between Supreme Chef and Lethal Chef. Also see Crippling Overspecialization for other non-culinary examples.