Set Right What Once Went Wrong 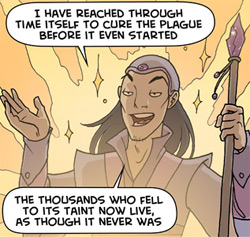 Unfortunately, now that the plague had been erased from history, no one knows what to reward him for.
"Theorizing that one could time travel within his own lifetime, Doctor Sam Beckett stepped into the Quantum Leap accelerator — and vanished. He awoke to find himself trapped in the past, facing mirror images that were not his own, and driven by an unknown force to change history for the better. His only guide on this journey is Al, an observer from his own time, who appears in the form of a hologram that only Sam can see and hear. And so Doctor Beckett finds himself leaping from life to life, striving to put right what once went wrong and hoping each time that his next leap...will be the leap home."
— Opening, Quantum Leap
Advertisement:

The character receives foreknowledge of what will happen (or, if Time Travel is involved, Ripple Effect-Proof Memory will allow them to remember what happened "the first time around") and has to correct it.

Distinguished from "Groundhog Day" Loop by:

Combinations of "Groundhog Day" Loop and Set Right What Once Went Wrong are possible, however, and have been used on occasion: see for example "The Siege" on The Dead Zone, the Tru Calling episode "The Longest Day", Early Edition's "Run, Gary, Run", and the video game Randal's Monday. In fact, this combination is the entire premise of Day Break (2006).

Sometimes, trying to set right what once went wrong is what sets everything wrong in the first place, resulting in a Stable Time Loop and Two Rights Make a Wrong. Succeeding would create a Temporal Paradox (i.e. if you do manage to set right what was wrong, you would have no reason to travel back in time in the first place, which means the wrongness would still be there, so you'd travel back in time, etc.) When the purpose of the time travel is to save a person (but not alter the timeline) by pulling the person out of time, it's a Time Travel Escape. Stopping people before they commit the crimes often results in a Bewildering Punishment. If fixing the wrong doesn't involve making actual changes "by hand" but just doing something to make history snap back into place, that's a Reset Button.

Depending on how time travel works, this can pose a big moral dilemma: even if history has been altered to create a terrible new present, it's doubtful that everything about the new present is terrible. Most notably, new people have probably been born in it who never existed in the original timeline. Will "fixing" the timeline cause these people to cease to exist? Note that in a "branching timelines" scenario, there is no danger of this because there is no way to unmake the bad present, only to create a better divergent branch off of it, or to find your way back to your original branch.

Often the adventurer has to travel to fix things, combining this premise with Adventure Towns. This premise has also been applied to literature rather than time, with characters trapped in a Portal Book interfering with the book's original plot and being forced to set things back on track to resolve "the right way."

See Opening a Can of Clones for what might happen from careless misuse of this trope.

Contrast Make Wrong What Once Went Right, where the time traveler acts for either selfish purposes or because they're living on Crazy Street. See also Set Wrong What Was Once Made Right.

Note: World War II did not 'go wrong'. Travelling there will only make it worse, perhaps partly because half the countries in Europe were gearing up to start a war at the time...

Raiden Sends a Message Back

The worst outcome has happened Shao Kahn has won, he has absorbed the power of Blaze and Raiden is moments from death. To save everything Raiden sends a message back in time to prevent this future from ever happening.

Raiden Sends a Message Back

The worst outcome has happened Shao Kahn has won, he has absorbed the power of Blaze and Raiden is moments from death. To save everything Raiden sends a message back in time to prevent this future from ever happening.