Podcast / Pretending to Be People 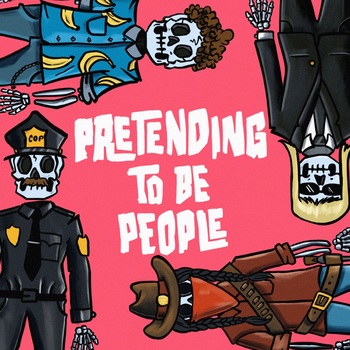 What is up, my tropers
Advertisement:

Pretending to be People is a Horror Comedy Actual Play podcast detailing the misadventures of three police officers in the fictional town of Contention, Missouri.

The podcast begins on Chief Maggie Cook's birthday, where a strange, unmarked gift disturbs her to the point of tears. In the subsequent few days, officers Clark Bishop, John Lee Pettimore IV, and Keith Vigna receive a series of reports leading them into a conspiracy featuring murder, a strange black goo, bizarre technology, and a councilwoman's missing dog.

Pretending to be People is run a using modified version of Delta Green; many rules are used sparingly, or eschewed entirely. In addition, GM Zach incorporates elements from other games, most notably Pulp Cthulhu. Season 1 began in November 2018, and currently features over 100 episodes of content of roughly 40 minutes to an hour in length. The crew released several non-Contention-related episodes, both as part of the regular podcast and on Patreon. Four recap episodes detailing the plot of episodes 1-96 were also released.

The latest story arc of season 1 began on June of 2021, so now's as good a time as any to start listening.

Given the amount of content in this podcast, the potential for unmarked Late Arrival Spoilers is quite high. Proceed at your own risk.

Pretending To Be People provides examples of: