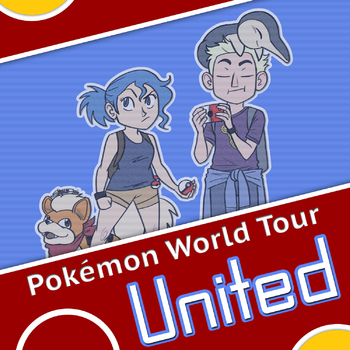 Left to right: Bango, Rose, Cobalt, and Treble. Not pictured: the plethora of other critters, friends, and enemies the two have come across. Official art by Shannon Manor.
Advertisement:

Pokémon World Tour: United is an Actual Play podcast created by Hey! Jake and Josh, where they play through a game of the fan-made Pokémon RPG Pokemon Tabletop United, run by their friend Alan.

Rose Jenny and Cobalt Elm are two trainers just beginning their journey from Pallet Town. Things are pretty normal at first, but soon they find themselves embroiled in plenty of strange and dangerous situations—meeting a strange but innocent boy who seems far too young to be on his journey, getting caught between two factions of Team Rocket trying to restore it to its former glory, and uncovering a plot to disrupt the natural order of things by kidnapping legendary Pokemon. And that's just the start...

The podcast was started in 2016, running concurrently to Jake and Josh's parent podcast, Pokémon World Tour. They often feature guest players, most frequently the show's artist Shannon Manor and Cira, as well as plenty to play Gym Leaders.

The series can be listened to on iTunes

. They have a Patreon

where one can donate to become a potential future guest on the show. Along with the show's official Twitter

, the cast are quite active on their own accounts, and Shannon will post comics

about the offscreen antis of various characters.

Due to the serialized nature of the Podcast, only spoilers from Act Two are guaranteed to be in spoiler tags.