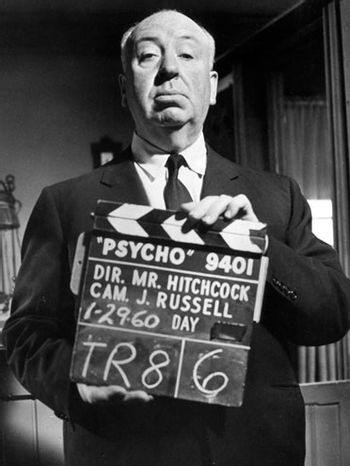 "Good evening. I'm Alfred Hitchcock."
"People believe that the cinema has to, by necessity, be horizontal in its form. That is, go to a great many places and locales. That is not so. It should be possible to make an interesting film in a closet with the door shut. The idea is to reveal human nature and behavior with your camera moves. This presupposes, of course, an interesting story and characters worth revealing."
—Alfred Hitchcock
Advertisement:

The acknowledged master of cinematic suspense, Sir Alfred Joseph Hitchcock KBE (13 August 1899 – 29 April 1980) is also one of the most famous film directors of all time, if not the most famous. Most people will have probably seen at least one of his movies at some time or another.

Hitchcock also produced and hosted the television anthology series Alfred Hitchcock Presents from 1955 to 1965, although he actually only directed 17 of the show's episodes. Many of his films are adaptations of novels or short stories.

Although "Hitch" is now considered one of the greatest directors of all time, for much of his life he was regarded as a mere entertainer rather than a serious artist. The French New Wave critics, especially François Truffaut, played a major role in correcting this by propounding the "auteur theory", which holds up the director (rather than the producer, screenwriter, actors, etc.) as the key artist on a film. Hitchcock was regarded as the major exemplar as this.

Most people consider either Vertigo or Psycho to be his best, although Hitchcock himself regarded Shadow of a Doubt as his personal favorite. North by Northwest, Rear Window, and The Birds are also frequently cited as favorites among fans. Rear Window in particular is often used as a plot template in other media.

The Hitchcock style went on to typify a certain kind of thriller, one which was copied by others over time. The Stanley Donen-directed Charade, for instance, was referred to by one reviewer as "the best Hitchcock film that Hitchcock never made". Also, the Italian Giallo film movement essentially stemmed from the Hitchcockian style. Hitchcock was also known for his frequent use of the 'MacGuffin' (a term he popularized) in his films.

Hitchcock was also infamous as being somewhat of a prankster, who would frequently keep his film crews and actors, and even personal friends, on their toes through practical jokes, often very elaborate and well-planned ones. While some of Hitchcocks' pranks could be considered pretty funny by all standards (such as one where he gifted his crew with expensive furniture at the wrap party, only for said crew members to come home with their presents and discover that said furniture was just a little too bit to big to fit through their front doors; Hitchcock had, of course, been visiting their residences in secret and carefully written down measurements of their doors to make sure this would happen), others definitely crossed the line into Dude, Not Funny! and Prank Gone Too Far territory (such during the filming of Frenzy where he discovered that actress Elsie Randolph was deadly afraid of fire; Hitchcock "accidentally" locked her in a telephone box one day on set and starting pumping smoke into the box), and revealed Hitchcock to be less of a merry prankster and more someone with a latent sadistic streak.

Hitchcock was knighted a brief four months prior to his death. He's also somewhat well known for making the shortest-ever acceptance speech at the Academy Awards (on receiving the Irving G. Thalberg Memorial Award in 1968): "Thank you very much, indeed."

More recently, his complicated record in dealing with women has come under scrutiny. On one hand, he frequently hired women for creative roles in the filmmaking process at a time when that wasn't very common, and his films often featured complex female characters. On the other hand, he still engaged in stereotyping and the Male Gaze, plus his treatment of actresses has been questioned, particularly his troubling relationship with Tippi Hedren.

Important books on Hitchcock's life and working methods include: Hitchcock/Truffaut, the founding work and still the definitive oral history; Bill Krohn's Hitchcock at Work, the best single-volume text on Hitchcock's filmmaking process, based on extensive and thorough archival research; and Patrick McGilligan's Alfred Hitchcock: A Life in Darkness and Light, by general academic consensus the best and most reliable biography on Hitchcock himself. Other important books on Hitchcock's films, life and production habits include Stephen Rebello's book on the production of Psycho, Dan Aulier's account of the making of Vertigo, and Tony Lee Moral's book on the making of Marnie.

You can now vote for your Hitchcock movie by heading over to the Best Film Crowner!

Tropes in the films of Alfred Hitchcock: