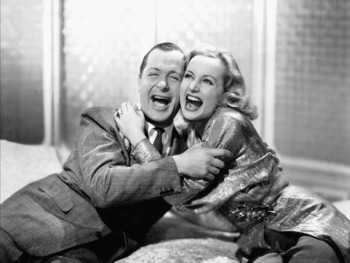 No, not the one with the spies and guns.

This is a 1941 Screwball Comedy directed by Alfred Hitchcock, starring Carole Lombard and Robert Montgomery.

When the film begins, married New Yorkers Ann and David Smith haven’t left their bedroom for three days due to a spat. Happily, they reconcile, but all of Ann’s relationship rules leave David feeling a little controlled. Ann asks him an important question before she lets him get back to work: if he could do it all over again, would he have married her? He answers with a "no"— not the right answer.

After a lot of soothing on David’s part, Ann finally lets him go to work. While there, a notary from Idaho visits David’s practice (he’s a lawyer) and says that due to a technicality, Ann and David aren’t really married. Rather than being upset, David is titillated at the prospect of being with Ann and treating it as an illicit affair. Meanwhile, the same notary, who has known Ann since she was a little girl, visits her and her mother. He tells her of the news, and Ann’s mother is shocked. Ann, on the other hand, isn’t worried because she knows David will propose and marry her that night. But while visiting their old dating spot, Momma Lucy’s Restaurant, Ann discovers that David has no intention of telling her the news or marrying her anytime soon. Her anger only intensifies when they’re home, and David is jauntily getting ready for bed—getting champagne, putting on his PJ’s with a pocket square. Ann knows this song and dance, and in a flash of anger, she kicks David out, because he had the gall to want to sleep with his technically unmarried wife…

This leads to amusing anecdotes with David trying to win Ann back, Ann dating David’s partner, Jeff Custer, and lots of bickering.

Notable for being Carole Lombard’s penultimate film (her last being To Be or Not to Be) before dying in a plane crash at the age of 33. It’s also worth noting that this was Hitchcock’s only straight Romantic Comedy / Screwball Comedy film note  not his only comedy in general, however. He'd later do The Trouble with Harry, which was a Black Comedy, in 1955 and his later films had elements of dark comedy sprinkled in., and quite different than his comedy-infused thrillers.