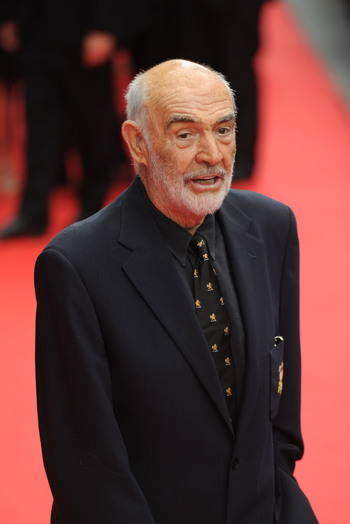 I'll take "Famous Titties" for $400!
"Perhaps I'm not a good actor, but I would be even worse at doing anything else."
Advertisement:

His life took an iconic turn as the first actor to portray James Bond on the big screen, one of many in a long line of lead roles that he would play over the course of his career. A former milkman, brick layer, truck driver and bodybuilder (back in the days when that meant 'big and athletic' rather than 'steroid-fuelled and vein-covered') notable for his impressive body hair, effortless masculinity and unique variation on the Scottish accent, Connery's sex-symbol status proved surprisingly durable despite the ravages of time, the early onset of baldness (he wore a toupee to play Bond - and reputedly wanted to go without for Never Say Never Again), and occasional press stories of misogyny on his part notwithstanding.

Although the Bond films made him a star, after some less than impressive acting ventures, Connery eventually tired of the role and the pressure the franchise put on him, and made not one but two attempts to leave it (barring his return for the non-EON produced Never Say Never Again), which reportedly angered Bond producer Albert R. Broccoli. Connery continued on, often playing tough guys and the occasional Lovable Rogue. For a time his career was in a rut due to headlining a string of flops, which eventually led to reinventing himself as a Cool Old Guy type, and spent the latter half of his career playing The Mentor to younger heroes, such as Kevin Costner's street smart teacher in The Untouchables for which Connery won an Oscar.

After starring as Allan Quartermain in the... some would say polarizing The League of Extraordinary Gentlemen movie, Connery retired from acting. Some suggest that these facts are related, that the film was so terrible that he just gave up. He steadfastly refused to come out of retirement, including refusing a cameo in Indiana Jones and the Kingdom of the Crystal Skull. The only exceptions were a Role Reprise for the 2005 Licensed Game 007: From Russia with Love and the voice of the title character in the low-budged Scottish animated film Sir Billi (the less said of which, the better). His final role was narrating the 2012 documentary Ever to Excel about the history of St Andrews University in Scotland.

On October 31, 2020, he eventually passed on in his sleep from natural causes in his Bahamas residence at the age of 90. It was revealed by his widow after his death that he had struggled with dementia prior to his death.

A major supporter of Scottish independence (though the fact that he hadn't actually lived there for fifty years before his death tended to undermine this a little). Particularly famous for Not Even Bothering with the Accent.

Had a dishtinctive way of shpeaking that everyone on airth believed they can imitate, although Eddie Izzard (and reportedly Tony Curran) ish particularly good at it.

Younger fans may identify with him from Saturday Night Live's Celebrity Jeopardy! recurring sketches, thanks to long-time cast member Darrell Hammond, the anthesis of Will Ferrell's Alex Trebek and was considered a highlight to said recurring sketch (though in the earlier Celebrity Jeopardy sketches, that honor went to Norm Macdonald as Burt Reynolds). Unlike Trebek, the real Connery never commented on the sketches, and Trebek said he'd never met the actual man.note In a strange coincidence, the two died within days of each other in 2020.

Connery was married to the late Australian actress Diane Cilento from 1962 to 1973, and had one son with her, actor Jason Connery. The marriage did not end well, to put it nicely. Following this failed marriage and her own faltering career as an actress, Cilento said some very nasty things about Connery in her later years, claims and accusations that Connery himself vehemently denied. Connery was married to Frenchwoman Micheline Roquebrune from 1975 until his death.

Also notable for trying to shoot you in every video store in the world. And YOU'RE THE MAN NOW, DOG!

There was even a website for things Sean Connery should say. Unfortunately, it no longer exists. Thankfully, "Shubreddit

" on Reddit gives us things that would sound hilarious with Sean Connery's voice. You can also find the old site here

Also notable for the "Rule of Sean Connery," something that he (and few other people) have been able to accomplish in their lifetimes.

Example of:
There Is No Try