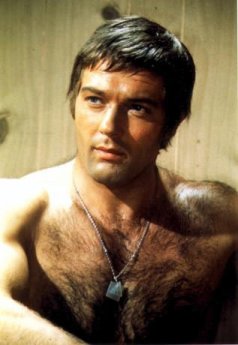 "...and every last inch of me's covered with hair!"
— Gaston, Beauty and the Beast
Advertisement:

In essence, it describes a man with a hairy upper body. Generally shown during a Shirtless Scene or when a guy walks around in a tank-top or an opened shirt. Usually indicates rugged masculinity when shown on a hero, especially when contrasted against a clean chested Sissy Villain.

Fuzzy chests or torsos can have different meanings depending on what body type they are used:

Type 1) When combined with a buff, muscular physique, it's usually to emphasize manliness or Badassery. Alternatively, it may mark a mature man (ie 25-30 and older) in contrast to a cast of younger men. Manly Facial Hair optional, but goes very well with it.

Type 2) When combined with an overweight body, it is generally to mean a boorish and/or unhygienic character. If used on Stout Strength, it usually indicates a Boisterous Bruiser. Often accompanied by copious amounts of back hair.

No matter the type, in fiction, a Carpet of Virility almost always goes hand in hand with a very sexual, if not utterly lecherous, personality, be the bearer attractive or not.

Hairy chests can be seen as fanservice, especially in The '70s, when it was quite common for men to show off their chest hair with open shirts and plunging necklines. The gay "bear" community also finds hairy, hyper-masculine men to be extremely desirable. It is also common in the Bara Genre. On a woman, this is almost universally considered to be prime-grade Squick material, sometimes comically associated with a Brawn Hilda.

It's just back hair, Ed.

It's just back hair, Ed.