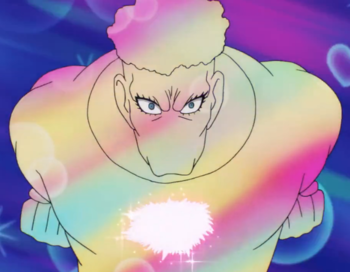 Camp characters — gay, macho, or straight — are flamboyant in appearance or demeanor. This doesn't necessarily mean that they can't hold themselves in a fight. Often times they'll fight in a way that suits their campiness. They may incorporate ballet in their moves, fight with beautiful clothing, unleash rainbow beams, use roses, etc., all in a flashy way that somehow works. May or may not end up conjuring Bishie Sparkles.

Often overlaps with Agent Peacock, Combat Aestheticist, Dance Battler, The Fighting Narcissist, Heart Is an Awesome Power, Personality Powers, and She-Fu. Note that while the Agent Peacock is an effeminate badass, Campy Combat is specifically about effeminate men fighting in a campy, over-the-top way. Compare Fighting Clown, where a character's fighting style is meant to be amusing, and Super-Cute Superpowers, where superpowers are girly and cute.