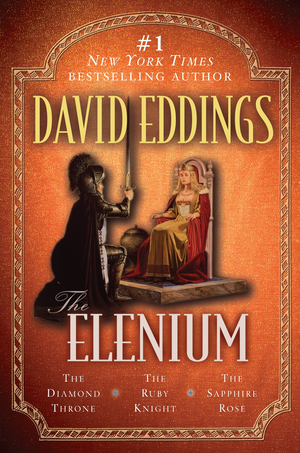 After ten years in exile, tired, aging Sir Sparhawk returns to his dirty, polluted home city of Cimmura to find that things have changed quite a bit in his absence. The incompetent King Aldreas has died under mysterious circumstances, and his youthful heir Ehlana is on the verge of death, her life preserved solely by an extremely risky spell. The city—and the kingdom of Elenia it rules—now is controlled in all but name by the corrupt Primate Annias of the Elene Church, who's put a puppet ruler in control and is stripping the treasury bare to pay for his private campaign for the head of the Church. And his ally, the fallen Pandion Knight Martel, is stirring up trouble across the continent to discredit and ultimately destroy the Church Knights to which Sparhawk belongs.
Advertisement: