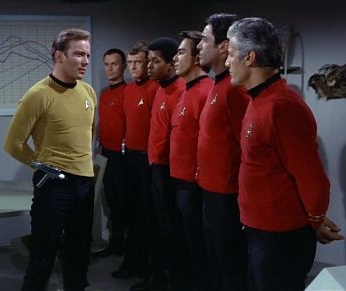 The Cavalry has arrived! Unfortunately, they're all Red Shirts... and they all graduated from the Imperial Stormtrooper Marksmanship Academy. Uh-oh.

The Hero, who may or may not have any special training or powers, is to be escorted into a "hot zone" by a team of Navy SEALs, Army Rangers, Space Marines, a SWAT Team, or some other heavily-armed and, one would assume, well-trained unit. Invariably, mere minutes into the mission, they've all been ambushed and killed off by the platoon-load, leaving only the hero alive to finish the job.

Happens all the time in action shows; so often, in fact, that it makes one wonder how these guys ever passed muster (heck, even survived long enough) for assignment to an elite military or security force if they drop like mayflies in every tactical situation.

This often massive loss of life will rarely be noted by anyone or have any direct effect on the plot, unless the heroes need to emote over how senseless the situation is. These guys are spear carriers in the finest Joseph Campbell tradition.

Provides a convenient demonstration of just how scary the villain is and also explains why the villain gets away all the time (at least at the time).

Please note: this Trope is actually very inaccurate when you compare it to Real Life. If you were to watch every episode of Star Trek: The Original Series, count the number of casualties that the Enterprise had, and then compare that to an actual military, you'd see that Kirk's record as a leader in this regard is excellent, far better than any general in U.S. history. Even war heroes like George Washington and Dwight D. Eisenhower had proportionately more casualties among their troops.note It has been suggested that it would be more appropriate to compare Kirk's casualty rate to units on exploratory, rather than combat, missions. It must be remembered that the Enterprise under Kirk's command participated in multiple combat missions against warships with superior weaponry (such as in the episodes "Balance of Terror" and "The Doomsday Machine" to name a few).

This is sometimes justified by the idea that the doomed Red Shirts are actually quite competent, especially in other areas, but they've never had any formal training in how to fight beings that can kill them simply if you look at them funny. In other words, take The Worf Effect and apply it to an entire military.

As the singular Red Shirt is the "good" counterpart to Evil Minions, the Redshirt Army is the "good" counterpart to the endless hordes of Mooks (and thus where to go when looking for easily-killed bad guys). The Badass Army is the logical opposite to this; take note how often (as in the example above) Red Shirt Army is, in fact, a subversion of Badass Army via The Worf Effect. Another opposite are the Men of Sherwood, who aren't quite badass enough to qualify as a Badass Army, but who are at least competent enough at their jobs not to be wiped out on the spot.

See Gideon Ploy for when no such army is arriving. See also Vanilla Unit, which tend to make up playable Redshirt Armies.

Also: A Red Shirt that has, through luck, moxie, or through the endearment of the fanbase may become a Mauve Shirt...clothed in the most powerful of Plot Armor. The Mauve Shirt will often accompany the army as their leader or representative...and generally makes it out alive. That is, until the Plot Armor wears off.

Not to be confused with Giuseppe Garibaldi's Italian Redshirts, who were a real-life Badass Army. Or with the British Redcoats, the land component of one of the greatest military forces in history.