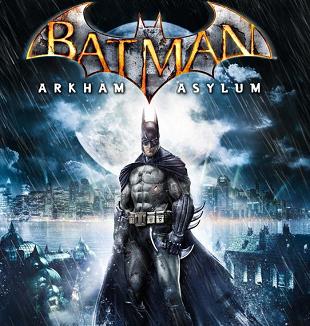 Pictured: The last thing The Problem with Licensed Games saw before a brutal ass-kicking.
"Plans, plans, plans... they always have their plans. But the problem with their plans is that when you take an insane person to the asylum... you're just taking him home. The very place he knows best."
— The Joker
Advertisement:

Gotham City is just beginning to emerge from another chaotic month. First, the Blackgate Penitentiary is destroyed in a suspicious fire, forcing the Gotham police to move its inmates to Arkham Asylum; then the Joker goes on another crime spree, culminating in a failed attempt to kill the city's mayor. The game opens with Batman ending the Joker's rampage and bringing him back to Arkham, where Warden Quincy Sharp hopes the clown will finally be rehabilitated. What they don't realize is that this time, Joker wants to be at Arkham: after escaping from the guards, he and Harley Quinn break into the asylum's security, free the inmates, and seize control of Arkham Island. Realizing that his archnemesis is up to something far more sinister than a mere breakout, Batman fights his way through the waves of convicts and tries to find out what the Joker really wants with the asylum.

The game is loosely inspired by Grant Morrison's Arkham Asylum: A Serious House on Serious Earth, and Dan Slott's Arkham Asylum: Living Hell. It is filled with an appreciation for the franchise's mythology and utilizes many of Batman's greatest foes to their fullest. Despite the premise, the game is not kid-oriented; being inspired by stories that delve in Psychological Horror, and having vicious action sequences with some ugly takedowns when you're brutalizing your enemies.

It features some of the talents behind Batman: The Animated Series, including a storyline by series writer Paul Dini and voice actors Kevin Conroy, Arleen Sorkin, and Mark Hamill reprising their respective roles as Batman, Harley Quinn, and The Joker.

The actual gameplay is divided into several modes: Freeflow mode (straight combat), Predator mode (striking from the shadows) and Detective mode (surveying the scene and looking for objects of interest), with some platforming elements tying the whole lot together. Each is well designed and suitably immerses you into the world and abilities of the Dark Knight.

A sequel, Batman: Arkham City, was released in 2011. A prequel game titled Batman: Arkham Origins and a portable spinoff/sequel to said prequel titled Batman: Arkham Origins Blackgate were released on October 25, 2013. WB Games Montreal developed the main game, instead of Rocksteady, and Armaturenote A studio founded by former Retro Studios staff developed the portable game. Blackgate would also get a Updated Re-release for the 7th generation home consoles and PC via Steam. A fourth game, Batman: Arkham Knight, this time developed once more by Rocksteady, was later released on June 2015. Finally, in 2016, Warner Bros. announced that remastered versions of both Asylum and City would be released for the PlayStation 4 and Xbox One as part of a collection called Return to Arkham later that year.

Joker injects the TITAN formula into himself to transform into a giant, hulking monster.

Joker injects the TITAN formula into himself to transform into a giant, hulking monster.