Video Game / Prince of Persia: The Sands of Time 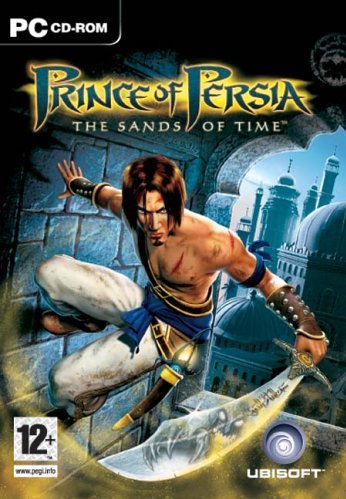 "Most people think time is like a river that flows swift and sure in one direction. But I have seen the face of time, and I can tell you: they are wrong. Time is an ocean in a storm. You may wonder who I am and why I say this. Sit down, and I will tell you a tale like none that you have ever heard."
— The Prince
Advertisement:

Prince of Persia: The Sands of Time is a 2003 video game and the first chapter in the newer Prince of Persia trilogy developed by Ubisoft. It reproduced the series' popular combination of combat and climbing puzzles, and added Le Parkour and what is still the most successful use of time-distortion effects (previously seen in such games as Max Payne and Blinx: The Time Sweeper), as well as creating an entirely new story with a more complex hero, an expanded role for the princess, and one doozy of a plot twist.

The Prince is a young man accompanying his father to an Indian-like kingdom, whose Vizier betrayed them to the Prince's armies. Among the spoils of that kingdom is a large hourglass called "The Sands of Time" and a dagger that the Prince claims. The Vizier then tricks the Prince into opening the hourglass and unleashing the curse of the sands upon the land of Persia. Confused over what happened, he finds himself in the company of Farah, a princess of the kingdom he just ransacked and who has knowledge of what he has done, and has to go fix what he broke.

The game was originally released for the Nintendo GameCube, Xbox and PlayStation 2. A Game Boy Advance Reformulated Game came out at the same time, loosely following the console storyline (plus a few Call Backs to Prince of Persia) but with completely different gameplay. It could be linked with the GameCube version for extra bonuses in both games. An HD rerelease of this game, along with its sequels, came out for PlayStation 3 in 2010.

A remake was announced on September 10th of 2020 for release in March 18th 2021. However, it has since been delayed. Peep the trailer here

Tropes appearing in the main game:

"No no no, that's not the way it happened. Shall I start again?"