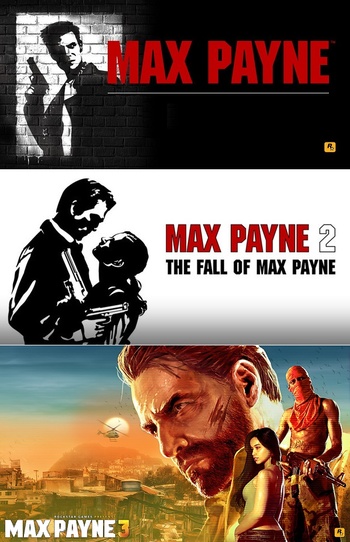 "Everything ripped apart in a New York minute..."
"They were all dead. The final gunshot was an exclamation mark to everything that had led to this point. I released my finger from the trigger, and then it was over."
— Max Payne
Advertisement:

The first game, Max Payne, was an attempt to break video games into Film Noir. A mixture of both the film and graphic novel treatments of noir, it featured such stalwart elements of the genre as the hard-boiled cynical hero, the capable and mysterious Femme Fatale, and the complex plot with myriad linear and tangential echelons of villains, all played under a gravel-voiced narration laden with gothic imagery and twisted arthouse metaphors. There are even a number of references to Norse Mythology. The cutscenes were told in Graphic Novel form, made by photographing the scenes and altering them digitally to resemble watercolor drawings.

The game's main selling point was the use of Matrix-style Bullet Time (despite the game being in the works before the movie came out), which allowed the players to slow down key points of the game while letting them aim and react as usual. This gave players an edge over the bad guys as well as looking darn cool, especially since the game was one of the first to use projectile modeling for each and every bullet rather than a hitscan technique. Slowing down time slowed down the bullets as well, letting you see every bullet you dodge. The game also impressed with its highly interactive environments, deep soundscape, and interesting aspects of gameplay such as playable dream sequences.

by the newly-formed Poets of the Fall.

It took eight years for Max Payne 3 to be developed and released. This time, it was developed entirely by Rockstar Games, with no design work but constant feedback from Remedy. This game movies away from the noir run-and-gun style of its predecessors, with more focus on action.

In April 2022, it was announced that Remedy and Rockstar was planning to release a remaster of the first and second game for PC, as well as PlayStation 5 and Xbox Series X|S.

open/close all folders
A-C
D-F
G-L
M-R
S-Z
There was something disturbingly familiar about the letter before me. The handwriting was all pretty curves.