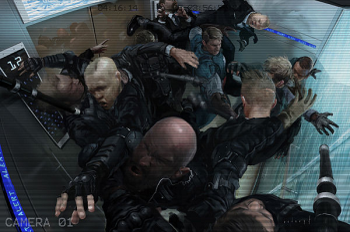 Some places are just designed for epic fight sequences. The lush scenery, the rippling wind in the Badass Longcoat, the Greek choir blaring triumphantly in creepy tone...

And then there's the Elevator Action Sequence.

There are advantages to the Elevator Action Sequence which make it so common in fiction. The main one is that it forces an arbitrary restriction on the heroes: in a game or movie with many wide-open spaces, elevators (even large, moving ones) tend to be static areas from which it is impossible to escape. The situation forces characters into a fight whether they like it or not, and also moves everyone automatically, so that we can pay more attention to the battle than where they're going. That people on an elevator must be going somewhere is naturally a foregone conclusion.

Sometimes the elevator in question is an inclined elevator, where the elevator moves along a diagonal plane instead of straight up and down.

This tropes is most common in early nineties Beat 'em Up games, which often used a moving platform rather than an enclosed elevator, allowing the player to throw enemies off the side. Although those games are out of vogue these days, examples can still be found occasionally in platformers, Action games and RPGs.

Often parodied by having two combatants fight their way inside the elevator, then calmly wait for the elevator to arrive before resuming the fight.

Lift of Doom is a specific variant, usually found in Platform Games.

This trope is not to be confused with Elevator Going Down, which is another form action entirely. Its polar opposite is the lack of action in an Uncomfortable Elevator Moment.

Compare Elevator Escape, where the action comes from the villain or monster reaching through the closing elevator doors. See also Evil Elevator. Sister trope of the Cable-Car Action Sequence. Has nothing to do with the Elevator Action series of video games, which has you fighting people pretty much everywhere except the elevators.

A battle in Stage 9's elevator.

A battle in Stage 9's elevator.