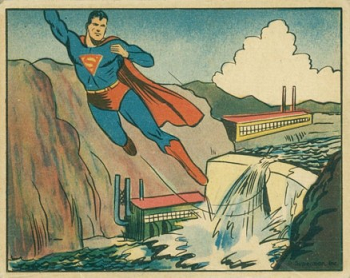 That's how you get a Disaster Movie with a Big Dam Plot, where a dam is threatened with destruction or actually destroyed in whole or part. Though a Monumental Damage threat can be very effective indeed, sometimes the attackers do manage to destroy it, or it just happens kind of randomly. In any case, you don't want to stay around.

The outdoor equivalent of the Exploding Fish Tanks. See Seal the Breach for attempts to fix damages to the dam.