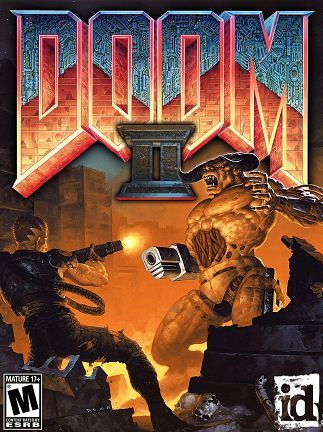 PROTIP: To defeat the Cyberdemon, shoot at it until it dies.note Just keep circle-strafing!
Advertisement:

Following the events of the first game, the Doom Marine returns from Hell after killing the Spider Mastermind. When he arrives on Earth however, he finds that the demonic hordes have launched a full-scale invasion and are currently in the process of slaughtering the remnants of humanity. The only hope for civilization is to escape the Earth in a fleet of spaceships, but a force-field set up by the demons is preventing them from leaving the planet. It's up to the Doom Marine to tear through the demonic forces, deactivate the force-field, and journey back into Hell to stop the apocalyptic invasion permanently.

Relying on the same game engine as its predecessor - to the point that the first Doom received some of the second's under-the-hood changes a month prior to its full release with v1.666 - Doom II doesn't stray far from the original's gameplay. It was released at retail from the get-go and has levels which are played in sequence from beginning to end, unlike the shareware release of the first game and its distinct episodes. A new roster of enemies were added to increase the difficulty and force the player to come up with new strategies while traversing the game's levels. The game also features the addition of the Super Shotgun and the Megasphere, giving the player new ways to kill demons to their heart's content while keeping themselves in top form.

Civvie and the Super Shotgun

In his Pro Doom II video, Civvie gushes over the Super Shotgun and its powerfulness. He argues that it being borderline OP is actually balanced due to the rising difficulty later in the game

Example of:
Shotguns Are Just Better

Civvie and the Super Shotgun

In his Pro Doom II video, Civvie gushes over the Super Shotgun and its powerfulness. He argues that it being borderline OP is actually balanced due to the rising difficulty later in the game