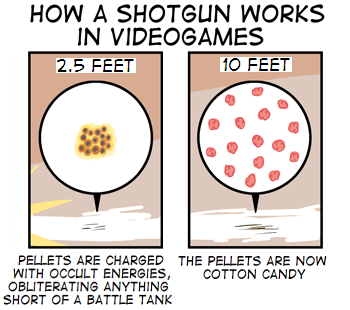 For metric users, that's 0.75 metres and 3 metres, respectively.
"Also, at this time, we would like to make a few corrections: Shotguns are actually not hilariously, stupidly inaccurate. Also, getting shot with one is lethal and does not, as depicted in the game, merely tickle."
— Noah Antwiler, Let's Play

In the real world, shotguns are a weapon with an effective range anywhere from 20 to 40 meters (66 to 131 feet), depending on the choke used and amount of charge in the shell.note A shotgun of very good quality is regarded as able to hit a target the size of a rabbit or pheasant with most pellets from the first shot at 50 meters, or about 160 feet. This is laughably short compared to any rifle or carbine, even a tiny .22, but comparable to the effective range of a standard, non-custom semi-auto handgun or revolver (usually about 25 to 50 meters), enough to be lethally dangerous for game or whichever people happen to be in vicinity.

But in Video Games, this range is invariably about five to ten meters or less. Anything farther away will rarely ever receive more than Scratch Damage, but anything inside this range will be quickly reduced to the consistency of chunky salsa. Shotguns in video games also tend to be stupendously inaccurate, but this too is the opposite of reality; the purpose of the wider spread of a shotgun's shot is that it increases the chance of hitting the target. Extreme examples will enforce the shotgun's short-range specialisation by giving it an Arbitrary Maximum Range — that is, the shot doesn't do less damage at long range, but physically ceases to exist.

This trope is largely the result of weapon balancing mechanics in shooter games, since most multiplayer shooter maps are actually just small arenas designed around player and weapon balance, and those tend to be very short-ranged compared to reality; too short for an actual shotgun's range limitations to be an issue. In many cases, the shotgun has its own niche in a game's Tactical Rock–Paper–Scissors, outclassing all other weapons at point-blank range, but losing everywhere else. Some games have your choice between a weak shotgun blast that has better range, and a more powerful attack that has virtually no range. Others have a choice between a Sawn-Off Shotgun with a huge spread and an intact one with longer range.

In addition, a shotgun's damage output in video games tends to be inversely proportional to its rate of fire. Pump action and double-barrel shotguns are massively more powerful and often inflict a One-Hit Kill at short ranges, while automatic shotguns require two or even three hits to score a kill under the same circumstances. The obvious reason why this happens is because automatic shotguns that don't have their damage output nerfed to compensate for their higher rate of fire risk becoming major Game Breakers, and the resulting efficiency compared to other shotguns means players won't pick anything else other than automatic shotguns.

Although "realistic" shooters are something of a current trend, the trend-setter follows this trope to the letter, assuring that it will remain common despite other attempts at realism; even when some games try to create a more accurate shotgun, it is often decried as "unrealistic" or over-powered.

A subtrope of Short-Range Long-Range Weapon. How appropriate the cone of fire is for the situation may affect whether Shotguns Are Just Better. Contrast Sniper Pistol, where a weapon with a relatively short range in real life is given extreme range and hitting power in video games. Compare Video Game Flamethrowers Suck, where another decently-ranged real-life weapon is given awfully short range in video games.