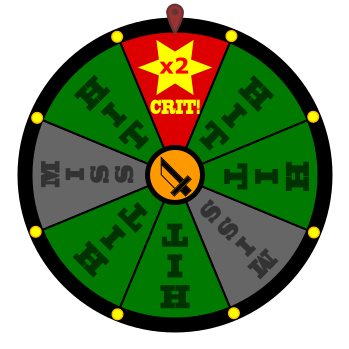 In a game which relies heavily on numerical statistics, particularly an RPG, a character will have a chance of doing noticeably increased damage with an attack if the right number comes up. The likelihood of this occurring may or may not be affected by the aforementioned stats, and sometimes magic may be given this little perk as well. Sometimes this is accompanied by different damage text or special effects (which may be more than just graphics).

There are two general methods of handling critical hits: In the first method, they simply do extra damage, usually multiplying the base damage by some number. In the second method, random results are generated from a "table" of possible effects, which range from extra damage to Subsystem Damage to instant death.

Originating from Empire of the Petal Throne (though it wasn't referred to as such), the game's creator explains that this is a result of the attacker hitting just the right vital organ or structural flaw with just the right force or speed to deal significantly more damage than otherwise would be possible. Originally, this was called a "Lucky Hit." Most games have since adopted this explanation as a convenient Hand Wave.

This differs from Elemental Rock–Paper–Scissors in that it usually applies to element-free attacks (i.e. physical attacks), although elemental attacks can have this effect as well if luck permits.

Maximizing the chance of one is a favorite goal of the Munchkin and those who practice Whoring in general, due to the (usual) lack of drawbacks. Said coveted Luck Stat might fix that. However, despite this Power Gamers despise it, as they do any sort of luck, and seek to eliminate it whenever possible, often resulting in Stop Having Fun, Guys. Hilarity then follows.

A Critical Hit Class employs this to get the best possible outcome. Boom, Headshot! is a similar trope applied mainly to First Person Shooters, although that involves skill rather than luck. Not to be confused with the Podcast of the same name. Compare Randomized Damage Attack where a particular attack has a widespread random amount of damage, from very big (so as to be called a "critical hit") to very small; this kind of attack may be combined with an actual Critical Hit. Contrast Critical Failure.