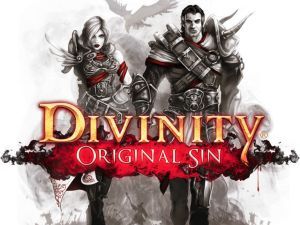 Divinity: Original Sin is the fifth (or third, if you don't count spin-offs) entry in the Divinity RPG series by Larian Studios. Taking place over a thousand years before Divine Divinity, it revisits the idea of dual protagonists from Beyond Divinity: a pair of Source Huntersnote both of whom you control in single-player, while in the online Co-Op Multiplayer, you and another player control one each, members of an order dedicated to stamping out a dangerous magic called the Source, investigate a murder in disaster ridden Cyseal. A Star Stone left at the scene of the crime blasts the Source Hunters to a shelter dimension called the End of Time, where an imp and the Weaver of Time recruit them into saving existence from the Void Maelstrom, and maybe finding out why the place seems so familiar.
Advertisement:

Originally funded internally, Larian ran out of money in early 2013, leading to a Kickstarter campaign that brought in over one million dollars

Gameplay is an isometric turn-based RPG centered around Geo Effects. For example, the Rain spell can be followed up with a lightning spell to shock every enemy who got wet by the rain for lots of damage and a stun. The game also borrows many elements from Immersive Sim games, as well as encouraging experimentation and heavy use of items, skills and spells to break through tough encounters.

, was fully funded in 11 hours, and met all its stretch goals by the end of the campaign.

for a cooperative, storytelling adventure Board Game, Divinity Original Sin The Board Game began in 2019 and reached its funding goal in 4 hours.