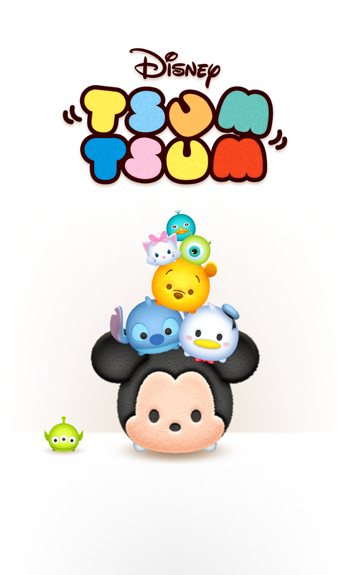 Disney Tsum Tsum, promoted as LINE: Disney Tsum Tsum, is a 2014 Free-to-Play Match-Three Game for iOS and Android developed and published by Line Corporation (makers of the Line messaging app

) that is based on the toyline of the same name, featuring Disney, Pixar, and Star Wars characters as adorable little plushies.

Tsum Tsum plushies have fallen from Disney Store shelves overnight and need to get back on those shelves before it reopens! Players have to clear away the Tsums from the playfield by dragging their fingers on their device's touchscreen and link at least three of the same Tsums together. The more Tsums linked, the more points earned. Players also earn coins to spend on more Tsums when four or more Tsums are linked. If players clear away at least seven Tsums, they can also earn "bubbles"note "bombs" in the Japanese version to clear a large burst of Tsums quicker.

Players have to be quick about clearing away Tsums, though, as they only got a minute to do it! However, if they clear enough Tsums at a time, then they can trigger Fever Mode for extra time, extra points, and extra quick Tsum clearing.

, while the Global version is on the App Store here

The game also had a Marvel counterpart in Marvel Tsum Tsum, which was developed by XFLAG and published by mixi, but that one only ran from the end of August 2016 to the end of October 2017. The Japanese version of Disney Tsum Tsum has since added a few Marvel characters to the game. There is also a Japanese and Traditional Chinese only bubble shooter spin-off game called Disney Tsum Tsum Land that features 3D models of various Tsums. Also, during a Nintendo Direct released on February 13, 2019, a new Party Game spin-off for Nintendo Switch called Disney Tsum Tsum Festival was announced to be released later in the year, published by Bandai Namco Entertainment.