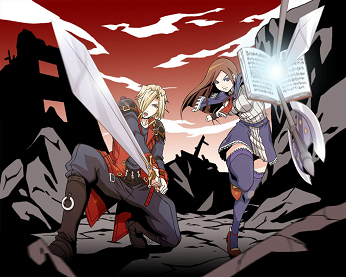 A warrior and a magic user working together.

In any setting where magic has some degree of pervasiveness, the Squishy Wizard is a fairly common archetype. In addition to being physically weak, such characters often need time and concentration to incant their spells, especially in the absence of Vancian Magic. Time and concentration aren't exactly easy to come by when you're being attacked by several enemies at once, or even just one enemy. Even if you could easily take your enemies out with a single spell, if your opponent never lets you fire one off, you're basically helpless. Add that to the "squishyness" and adventuring solo hardly sounds viable.

Fighters, on the other hand, can generally take care of themselves; it's part of the job description. However, hitting something a bunch of times with a sword, even a BFS, sometimes doesn't work, but a blast of fire would be just the thing. To get the really big scores, some magical artillery is usually required, or is, at the very least, incredibly helpful.

Sword and Sorcerer is what you get when these characters team up in order to offset each others' weaknesses. The combat dynamic usually works one of two ways, determined largely by what type of magic the mage uses:

Fighter and Glass Cannon has the mage basically acting as artillery; the fighter holds enemies off while the mage charges up, and once the mage is finished, he or she obliterates whatever is left. The fighter may be a Stone Wall specializing primarily in defense, or they may be perfectly capable of wrecking shop the old-fashioned way, but not as efficient at doing it on a large scale as the mage, rendering the two of them capable of tackling threats greater than the sum of their parts.

Fighter and Healer has the mage primarily acting in a support capacity, casting beneficial Status Buffs and healing the fighter while the fighter takes care of actually killing everything. As in the above, it still generally falls to the fighter to keep the enemies off the mage's back, but here, he's also the one doing the killing, with the mage making him more efficient at it.

The above is not a hard and fast rule. Many offensive mages know a healing spell for emergencies, and offensive magic is a common way for healers to contribute to the battle even after the fighter is at full strength. Sometimes the sorcerer is The Red Mage and fits both archetypes equally.

Typically the fighter ends up being something of a Lightning Bruiser, the better to defend the mage from numerous enemies, and relying on his speed and skill to keep himself alive. Often, the fighter will be male, and the sorcerer, female. Can be inverted, though. Can also be found with single-gender duos. If they're both guys, then expect a manly swordsman and a sensitive sorcerer. If they're both girls, then they'll likely be a tomboyish sword and a girly sorceress.

If it's a male/female pair (or, occasionally, even if it isn't) expect a Battle Couple, sometimes extending all the way to Mindlink Mates; otherwise, they'll probably be Bash Brothers. A romantic pair is often a Muggle–Mage Romance by definition. The fighter of the pair is usually a Magically Inept Fighter, since a Magic Knight could do it all himself without needing a partner. Also see Fighter, Mage, Thief and Short-Range Guy, Long-Range Guy for when the long range character uses a weapon rather than magic. Contrast Action Duo. Compare Lady and Knight, which has a similar dynamic of a warrior protecting someone physically capable of doing it themselves; the lady will often be the mage for this reason. Compare Damager, Healer, Tank, a trio where the fighter is the tank or the damager and the mage is the damager or healer.