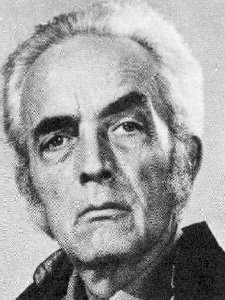 Fritz Reuter Leiber Jr. (December 24, 1910 – September 5, 1992) was an American writer of fantasy, horror and Science Fiction, best known for his fantasy series Fafhrd and the Gray Mouser, and for creating the term "Sword and Sorcery".

His other works include the contemporary fantasy novel Conjure Wife; the science fiction novel The Wanderer; and the Time Travel Change War series which included the acclaimed short novel The Big Time.

He was given a lifetime-achievement World Fantasy Award in 1976, and was elected a Grand Master of Science Fiction in 1981.

Leiber's father, Fritz Leiber Sr., was a well known actor of silent films, while his son, Justin, was a science fiction writer and philosopher.

Works by Fritz Leiber with their own trope pages include:

Other works by Fritz Leiber provide examples of: