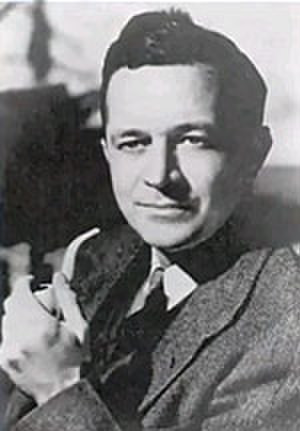 Murray Leinster (1896 - 1975) was the pen name of William F. Jenkins, a prolific author of science fiction whose career spanned from the 1910s to the 1970s.
Advertisement:

His works include several firsts. "The Runaway Skyscraper" (1919), his first published SF story, is one of the first works in which a location or structure and all its inhabitants are transported to an earlier point in history. "Sidewise in Time" (1934) has a claim as the first science fiction story featuring alternate histories, and also the first Alternate History story specifically to ask that perennial favorite question, What if the South won?. "First Contact" (1945) has a claim to first Universal Translator and first use of "First Contact" as the term for two alien races meeting. "A Logic Named Joe" (1946) predicts the use of home computers and depicts a public computer network very similar to the Internet.

Leinster also wrote several Tie-In Novel s based on the 1960s TV series The Time Tunnel and Land of the Giants.

Leinster won a Hugo Award for his 1956 novelette "Exploration Team", and "First Contact" was awarded a Retro-Hugonote (the Retro-Hugos honor works that might have won Hugos if there had been Hugos at the time) in 1996. The Sidewise Award for Alternate History, established in 1995, is named after "Sidewise in Time".

Works by Murray Leinster with their own trope pages include: