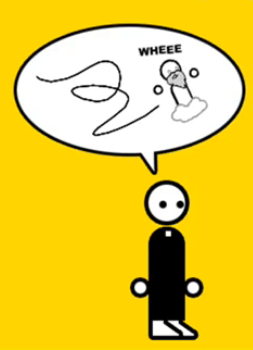 Very mysterious.
"When you do things right, people won't be sure you've done anything at all."
— God(?), Futurama, "Godfellas"
Advertisement:

God (or suitable equivalent thereof) works in mysterious ways. How mysterious? Really mysterious. Like, chaos theory mysterious. Who knew that ending a war could be as easy as helping one little old lady cross the street — or letting the Girl of the Week get run over by a truck?

In Mysterious Ways is what happens when the divine interacts with the mundane in ways that don't make sense at first appearance. In time, however, the results are palpable. This is usually done to convey a sense of omniscience; after all, if you can see how all events play out, it's more likely you'd go the subtle route than try to rain fire from Heaven every time things don't go your way.

Characters who fall under this trope are unlikely to use an Omniscient Morality License; why put the hero through hell when you can save the day by moving a book across the room? Unless that was the only way they could grow as a person...

If God Is Inept or merely Flawed, He might try to claim "I Meant to Do That!" by invoking this trope.

Implies For Want of a Nail. Usually overlaps with Gambit Roulette, which is about plans relying on seemingly chance events in general. Compare Maybe Magic, Maybe Mundane and Butterfly of Doom. Often used as flimsy justification for Deus ex Machina and A Wizard Did It. Not to be confused with the U2 song "Mysterious Ways".

open/close all folders
Anime and Manga
Comic Books
Fan Works
Films — Live-Action
Jokes
Literature
Live Action TV
Music
Standup Comedy
Man: It's God's will, you weren't meant to be together.
Titus: Really? God's will? God got involved in this? Twenty years of my life pretty much gone? All the money I made, the career I chose, pretty much torn to pieces, two kids' lives shattered? Really, God? Is that how you work? This brutal, disemboweling nightmare is you? Cause if that's the case, THEN THERE IS NO GOD!
God: Christopher, I did this so you can meet a 29-year-old, five-foot-eleven Diesel Jeans model who has two college degrees and already paid for her own boob job.
Titus: How shall I serve thee, lord?
Tabletop Games
Theatre
Video Games
Webcomics
Web Original
Western Animation