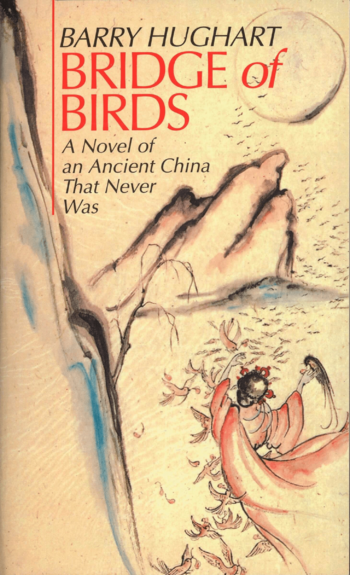 Bridge of Birds is the first installment in Barry Hughart's literary trilogy The Chronicles of Master Li and Number Ten Ox. It is a fantasy novel taking place in a version of ancient China wherein the regional folktales and Taoist myths are all true. The gods really do meddle in the affairs of mortals (but subtly, for reasons of etiquette), and minor bits of magic can be found anywhere.
Advertisement:

Lu Yu, nicknamed Number Ten Ox because of his birth order and great strength, is a humble peasant living in the village of Ku-fu, content to spend his days farming and assisting with the annual silk harvest... until one year when the abject failure of the harvest coincides with a devastating plague that infects the children—and only the children—of the village. Ox's aunt sends him to Peking with money in order to hire a wise man to solve the mystery, and he winds up with one Li Kao, an antiquated drunkard who keeps company with bandits and thugs. But despite these "slight flaws in his character", Master Li also has a well-developed sense of justice and quite possibly the keenest mind in all China, and he eagerly joins—in fact, he takes command of—Ox's quest to save the children. A quest that ultimately takes them into every conceivable corner of China, into bustling cities and deep caverns and across deserts and mountain ranges, to do business and battle (sometimes simultaneously) with brilliant scholars, horrifying monsters, scheming noblewomen, obsessive businessmen, demigods, and not a few tormented ghosts.

The writing style is lush and poetic yet semi-conversational in tone, featuring devices such as alliteration, humorous exaggeration and understatement, and casual references to Chinese history and folklore. The tone is a wonderful blend of action, drama, comedy, and even romance, along with an engaging theme of mystery and discovery as Ox and Master Li gather and put together the pieces of the puzzle. Although short as fantasy novels go—it clocks in at under 300 pages—it nonetheless contains more story than many a conventional Door Stopper.

Hughart wrote two sequels—The Story of the Stone and Eight Skilled Gentlemen—which have been published in an omnibus edition with their precursor.

Bridge of Birds contains examples of:

The Story of the Stone contains examples of: