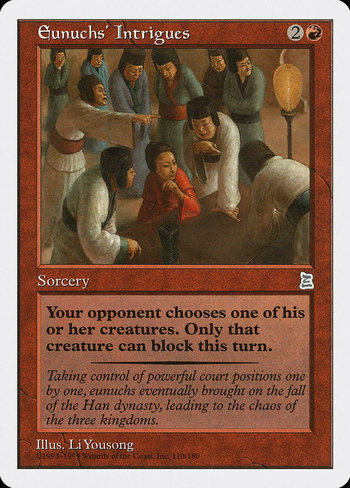 It takes balls to take the throne.
"Why is it no one ever trusts the eunuch?"
— Lord Varys, Game of Thrones
Advertisement:

So you've got a villain and you've got to give him a Red Right Hand, and your protagonist is the manliest of men. So, why not make your villain a Foil and remove his male gonads? Especially prevalent in fantasy and historical fiction, the Evil Eunuch is simultaneously creepy and effeminate—think Sissy Villain meets Virgin-Shaming. Since testosterone increases muscle gain, a villainous eunuch's lack of testosterone makes him unlikely to have a Heroic Build. Instead, he tends to be either a Fat Bastard (especially since castration also decreases metabolism and energy levels, hence the Lazy Neutered Pet) or Lean and Mean. Eunuchs also tend to have less bodily and facial hair than intact men do, which lends itself well to comparisons to reptiles. Throw in a Creepy High-Pitched Voice note along with Creepy Long Fingers and Creepily Long Arms (and long legs, which tends to overlap with Evil Is Bigger) if the writer is going for accuracy if he was castrated before puberty, and you've got a great recipe for an Obviously Evil foe. And of course, the limited sex drive makes this trope likely to overlap with the No Love for the Wicked.

Eunuchs tend to be Evil Chancellor types, in keeping with the myriad historical records of ruthless and power-hungry eunuchs in societies like the Byzantine Empire, Ottoman Turkey, and Imperial China. These empires appointed eunuchs to key court positions under the assumption that since they couldn't have children, they'd be more inclined to serve the good of the empire instead of trying to accumulate power for their families (which was an especially important factor in places like Byzantium and China, where usurpers who aimed to start their own imperial dynasties weren't uncommon). As it turned out, the lack of a family to enrich didn't stop eunuchs from seeking to enrich themselves, and in fact, gave them that much more time to scheme and plot, and that much less incentive to ensure they didn't destabilize the empire for future generations. So employing eunuchs didn't do much to solve the problem, and in some ways made it worse. Meanwhile in post-Roman Europe ("Roman" here encompassing the Byzantine, or more properly Eastern Roman, Empire) or a setting based thereon, if a eunuch appears in a Period Piece, he's likely a castrato singer who behaves not unlike the usual jerkass celebrity diva.

If a villain like this has supernatural powers, it could overlap with Virgin Power and Disability Superpower. Failing to avert the fate of the very castration that the animal so feared can be the Freudian Excuse for animal examples of this trope. Many, but not all male examples are Sissy Villains. It may or may not overlap with Pure Is Not Good: a villainous eunuch may be characterised as pure due to his lack of sexual development,note though in some cases, sex can still occur after castration or as impure due to his physical mutilation. This type of character frequently has an Effeminate Voice.

This trope is mostly, but not exclusively male. This trope is not restricted to castrations, both surgical and chemical. Penectomy and ovariohysterectomy examples can be included as well.

Compare Evil Cripple and Depraved Dwarf. Oh, and this trope has nothing to do with Unix outside of puns.