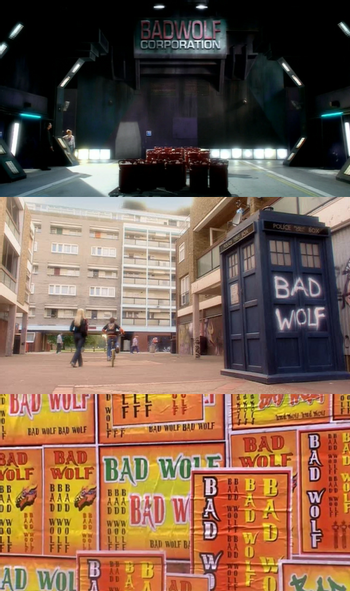 "Everywhere we go: two words. Followin' us."
Morden: What do you want?
Sebastian: Who are you?
— Repeated lines, Babylon 5
Advertisement:

A word or phrase that appears throughout an Arc as a Motif.

Arc Words can be a way to hint at the Aesop or one of the themes of a show, often in the form of a question the characters must find an answer to. Alternately, they can be used for Foreshadowing.

They're often cryptic, and left unexplained until the Climax or Dénouement. This builds up tension and mystery, and hints that anyone using the words knows more than they're telling. This enigmatic variant is a typical element of a Mind Screw, and is sometimes used as a memetic way of advertising the show.

Arc Words need not have attention drawn explicitly to them; they often rely instead on eagle-eyed/sharp eared viewers noticing for themselves. In the "Bad Wolf" example from the first series of the revival of Doctor Who, the words appeared as, among other things, a helicopter's callsign, a reference in dialogue to "The Big Bad Wolf", a graffito, and even in other languages (the [inaccurate] German Schlechter Wolf, and the Welsh Blaidd Drwg, the latter tipping off the Doctor about it).

Look for these on the Internet Movie Database "memorable quotes" page for the show, with the label "repeated line".

The high-browed, academic term used for this is "Leitwort" from the German for "leading" or "guiding word".

When this is a number instead of a phrase, it's Arc Number, and Arc Symbol if it's an image. Compare with Dream Melody.

Arc Words are not the same thing as a Running Gag, a Catchphrase, or even just a phrase that ends up popping up a lot due to being used a lot in the plot. "May the Force be with you" are not arc words; it's an expression and a social nicety. Arc Words also must help define the tone of their entire work, or at least the plot arc where they appear.

When Roderick mentions the words "Bad Wolf", Rose remembers that she saw those words throughout all of Season 1 of the revived Doctor Who series.

When Roderick mentions the words "Bad Wolf", Rose remembers that she saw those words throughout all of Season 1 of the revived Doctor Who series.