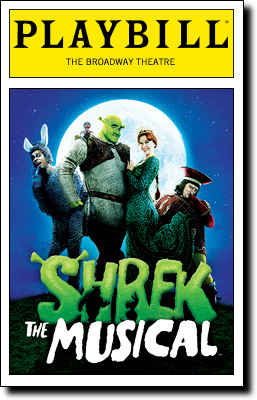 Shrek The Musical (music by Jeanine Tesori, book and lyrics by David Lindsay-Abaire) is an adaptation of the film Shrek (DreamWorks, 2001) as a stage musical. It opened on Broadway in 2008 after a trial run in Seattle. Multiple touring productions followed, and it is now available for independent productions. Despite sounding like a stupid idea to most people who first hear of it, it's actually a strong, faithful adaptation that keeps most of the movie's dialogue and includes some genuinely great music.

Shrek The Musical provides examples for the following tropes: