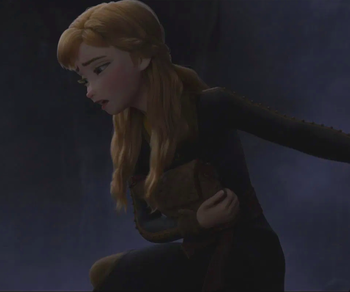 ♫ The life I knew is over, the lights are out
Hello, darkness, I'm ready to succumb ♫
"You ruined everything
You stupid, stupid bitch
You're just a lying little bitch who ruins things
And wants the world to burn"
— Rebecca Bunch to herself, Crazy Ex-Girlfriend
Advertisement:

The number in a musical where a character faces their Darkest Hour and undergoes a Blue Screen of Death of some sort. Usually involves less singing and more speaking/shouting.

Compare Sanity Slippage Song and Melancholy Musical Number, or Villainous Lament if the character singing is a bad guy. Sometimes doubles as a Grief Song. Can be a Dark Reprise for a much more cheerful "I Want" Song from earlier. Alternatively, this song can be followed with an uplifting Triumphant Reprise.

Maeja singing about how lonely she is.

Wash The Hurt Away

Maeja singing about how lonely she is.

Wash The Hurt Away