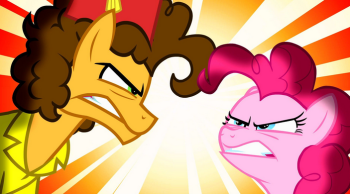 All of Ponyville is buzzing about the latest party to be thrown by Pinkie Pie: the "birth-aversary" of Rainbow Dash, which not only celebrates the flyer's birthday, but the anniversary of when she moved to Ponyville. Just as Pinkie gives a Pinkie Promise that Rainbow Dash will have the best party ever, an earth pony named Cheese Sandwich appears, who claims to be a certified party planner, and led to Ponyville by his own "Cheesy Sense" that a party was about to happen. He quickly proves his credentials, putting on a massive impromptu display of party wizardry for the residents of Ponyville. They flock to him, leaving Pinkie feeling confused and a little insulted.

Cheese Sandwich begins building a massive set for Rainbow Dash's birth-aversary, with everypony else pitching in — except for Pinkie Pie, who is left wondering what her role in the town might be now that Cheese is here. She makes a brief stab at other careers (delivering mail, construction work, nursing) but her attempts to enliven each job with her party spirit keep leading to disaster. As she sadly contemplates giving parties up for good, she sees the pictures of various parties she's thrown over the years. Filled with new resolve, she heads back into town to reclaim her place as the pre-eminent party-planning pony of Ponyville.

Pinkie Pie challenges Cheese Sandwich to a "goof-off," with the winner getting the privilege of headlining the upcoming party (and the loser... won't). Cheese Sandwich accepts. Rainbow Dash is called on to judge (since it's her party) and decide which of them is funnier. The two party planners give it their all, and the result is wildly-escalating chaos, with Rainbow Dash caught in the middle. At last, it all comes to a crashing halt when Pinkie drops a gigantic piñata on top of her. As she pulls herself out, visibly unhappy, Pinkie realizes that Rainbow Dash isn't enjoying any of this, which means she broke her Pinkie promise. She instantly forfeits the goof-off to Cheese Sandwich and walks away in shame.

Pinkie packs up her party supplies and prepares to abandon Ponyville to Cheese Sandwich, but the rest of her friends stop her. They explain that she is the permanent party planner for Ponyville, and that no one could ever take her place. Cheese Sandwich also appears with an unexpected revelation: in the past, he was a shy pony until he stumbled onto one of Pinkie's parties and was inspired to be the party pony he eventually became. The two party planners then team up to throw Rainbow Dash the best birth-aversary party ever.

Just before he walks off into the sunset, Cheese Sandwich gives Pinkie his rubber chicken, Boneless, that glows with a rainbow shimmer...

Example of:
Happy Birthday to You!