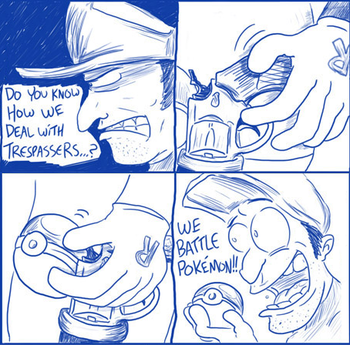 Brauno: I hope we don't run into any gang-bangers on the way home.
Onomatopeia: Don't worry Brauno, they usually challenge you to duel first, and they'll leave you alone if you win.
— Yu-Gi-Oh! Animated Duels, "Demonic Duels at Midnight."

A Sub-Trope of Adventure-Friendly World. In a World… where Card Games, Mon-battling, sports, or What Have You is Serious Business, conflict resolution often boils down to a Card Game, Mon-battle, Foo-off, or whatever-bout.

Every problem will inevitably lead to a climactic battle of Mahjong, or Uno, or the like. Is The Hero facing the threat of war? A terrible plague? An economic recession? Inevitably, there's a tangible villain responsible for it, and the solution is for the hero to confront them and beat them in whatever the story is about. If you're watching Tales of the Knights of St. Bob you're probably looking at a swordfight waiting to happen, but it's equally possible that you're watching something like Super Table Football Superstar and after an interminable mutual glare, one party will dramatically challenge the other to a game of table football.

Everyone has absolute respect for the authority of the fu-du-jour to decide who gets to walk away the winner. If the "Foo" in Foo Fu is arm wrestling, after Bob has won and is walking away, Alice will not even contemplate the possibility of shooting him in the back. If it's psychic manipulation and Alice has just won a tiring Battle in the Center of the Mind, it will not occur to Bob to jump at her, pin her to the floor and start punching her in the face. And, yes, even if Bob has just lost a game of table football he will just helplessly stand there, shaking his fist in frustration—because, well, what can he do? He's been beaten in a game of table football. Game over for him, really. The best he can hope for is a rematch. Fighting Alice in any way that doesn't involve table football doesn't cross his mind.

This extends beyond just getting the defeated party out of the picture. If the Big Bad has been bested, their whole evil operation will fold up on itself and disappear within the day. The Evil Army will not rally. There is no plan B. The superweapon The Hero managed to destroy while Storming the Castle will have No Plans, No Prototype, No Backup. It's as if some cosmic force had decreed that this conflict be settled with Combat by Champion. Whether the stakes are trivial or world-shatteringly huge, Duels Decide Everything.

If what's at stake is the hand of a (presumed-to-be) Neutral Female, this becomes a kind of Cock Fight.

Joey finds it rather unnecessary that Bandit Keith is having Zombie Boy challenge him to a card game just to obtain his star chips, when he could've more easily have stolen the star chips while Joey was unconscious.

Alternative Title(s): We Settle This With A Duel Of Fiddlesticks

Joey finds it rather unnecessary that Bandit Keith is having Zombie Boy challenge him to a card game just to obtain his star chips, when he could've more easily have stolen the star chips while Joey was unconscious.