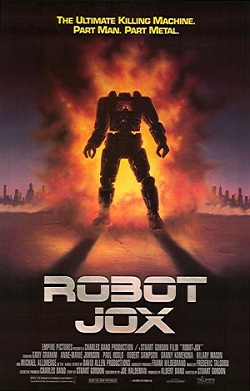 Achilles: You can live.
Alexander: Yes - if I kill you.
Achilles: We can both live!
Alexander: We are dead. We are Robot Jox.
Advertisement:

Robot Jox was a low budget western attempt to exploit the Humongous Mecha genre, with screenplay written by Joe Haldeman (yes, that Joe Haldeman) and produced by a predecessor to Full Moon Features. In a dystopic future, a nuclear war has devastated the earth. With war outlawed, all territorial disputes are settled through Combat by Champion using giant robots piloted by "Jox", and their battles have become media-televised sporting events.

The film follows Achilles, a famed jox for the Market, and his rivalry with Alexander, the best jox of the Confederation. With Alaska, abundant in valuable natural resources, on the line in the next contest, and the two both preparing for the last of their contracted ten fights, the next battle will be one of the greatest in the history of the conflicts. Subplots include a new generation of genetically engineered jox including Athena, who's in the running to become the first female jox, and a Confederate spy in the Market ranks that keeps leaking information to the Confederation.

Two different films were promoted as sequels: Crash and Burn in 1990 and Robot Wars in 1993. Though the only connection either of these movies has to Robot Jox is that Humongous Mecha appear in them.