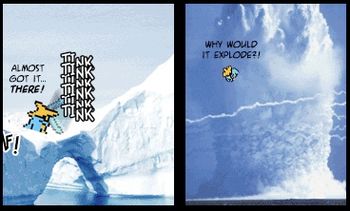 Warning: Contents under pressure.
"I do not understand why everything in this script must inevitably explode."
— Teal'c, Stargate SG-1, "200"

Everything Is Better with Explosions, isn't it? Well, if you spice it up to maximum, you have Stuff Blowing Up in complete defiance of science and logic.

In the wonderful world of fiction, nothing ever just breaks. If it's even slightly mechanical or electronic, its destruction is loud and accompanied by Impressive Pyrotechnics. Apparently, circuit boards, moving parts, and Tokyo are the most volatile substances in the universe.

And that's just in serious works. In comedies, anything can blow up, especially if there's an Epic Fail involved.

Objects that are particularly prone to exploding include:

Related to You Have to Burn the Web. Also related to Unrelated Effects, where the focus is on how awesome the weapon causing destruction is, rather than how explode-y the item being destroyed is. See also Incendiary Exponent, Catastrophic Countdown, Hair-Trigger Explosive and Ridiculously Potent Explosive. Sister trope to Made of Incendium, in which something easily catches fire. Contrast Made of Indestructium, which is when something is so ridiculously impervious to physical damage (without the excuse of, say, Nigh-Invulnerability superpowers) that it seems genuinely indestructible.

periodically while reading this page.