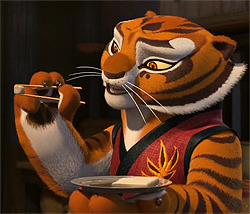 Everyone knows tigers love tofu.
"I am a nice shark, not a mindless eating machine. If I am to change this image, I must first change myself. Fish are friends, not food."
— Bruce, Finding Nemo
Advertisement:

In Real Life, vegetation isn't necessarily the best source of food. It's hard to digest, low in some essential nutrients and requires a specialized digestive system in order to properly process it into anything useful for the animal eating said vegetation (symbiotic bacteria in the gut may even be necessary to digest some types of plants). Because of this, most carnivorous animals are not well-adapted to eating plant materials (unlike herbivores, naturally).

In the world of fiction, however, this isn't the case. A normally carnivorous character can easily switch to a strictly vegetarian diet whenever they want without worrying about digestive problems. This usually occurs in shows with many Funny Animals as a means to address Carnivore Confusion by establishing a normally carnivorous animal as someone who prefers dining on a carrot to dining on a rabbit. It is often used for My Species Doth Protest Too Much characters to indicate that they have switched their diet to separate themselves from their more "predatory" associates, since Predators Are Mean and Herbivores Are Friendly. Or, though not as often, maybe they decide that hunting for food is too much work and decide to just switch to veggies.

A subtrope of Carnivore Confusion and Artistic Licence – Biology. Contrast Ascended to Carnivorism for when a normally herbivorous animal decides to eat meat, or Man-Eating Plant for when it's the plants that decide to switch around the food chain. Compare with Veganopia. Vampires who refuse to feed on humans are common enough to have their own trope. Being in a Predator-Prey Friendship might mean the predator invoking this.

No direct relation to Extreme Omnivore however, since the latter refers to actual omnivores.

Note: This ONLY applies to carnivorous charactersnote including species that are technically omnivorous but typically still need some meat and can't thrive on an all-vegetarian diet, such as dogs that switch to eating just fruits, vegetables, and other plant-based foods.