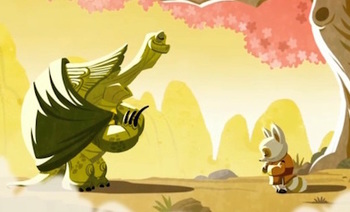 Turtles are often fairly long-lived animals, especially compared to other creatures their size. The common tortoise

a species native to the Mediterranean area and often kept as a pet, is fully capable of outliving its human owners. Giant tortoises, such as those native to the Galapagos and Seychelles islands, are the longest-living land vertebrates of all: Galapagos giant tortoises often live to a century in the wild, and one specimen lived for one hundred and seventy years in captivity, while Seychelles giant tortoises are thought to reach around two centuries of age — their tendency to outlive human observers has made their exact lifespan difficult to verify.

The result is that tortoises and turtles have obtained well-earned reputations as immensely long-lived animals, something that often carries over to their portrayals in popular culture. Turtle characters are often very old, much older than other characters they interact with. The association of old age with wisdom and life experience is carried over and naturally brought to extremes — since they're so old, these ancient reptiles can be expected to have seen and done a great many things over their long, long lives, and to have had time to accumulate extensive troves of wisdom and insights to share with younger and more inexperienced characters. The fact turtles are seen as (physically) slow is also a factor — presumably they spent a lot of their long lives thinking very carefully about things. In worlds of Funny Animals, Talking Animals, Civilized Animals and the like, tortoises tend to be cast as various iterations of the Mentor Archetype. Depending on the individual experiences and disposition the aged chelonian in question, they may be a Cynical Mentor, an Eccentric Mentor, an Old Master or any other subtrope, but regardless of the type turtles and tortoises are some of the likeliest animals to be cast as wise, old mentor figures.

This can extend to turtle-themed characters, even if they are not actual turtles themselves.

See also Sturdy and Steady Turtles, Shy Shelled Animal and Turtle Island for other common portrayals of turtles and tortoises in fiction. See Lovable Lizard for another reptile commonly portrayed in a positive light.