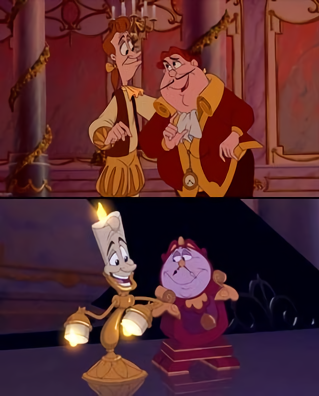 It could be worse; at least they're bright and punctual.
"The chieftain had been turned into a pumpkin although, in accordance with the rules of universal humour, he still had his hat on."
— Terry Pratchett, Lords and Ladies
Advertisement:

In fiction, when people turn into things, often times, the things will... look like themselves. Characters will often retain specific traits between physical forms. In some cases, this is as easy as hair and eye color, which makes sense to a degree. Things get a little confusing, though, when characters end up keeping a color scheme or markings based on, say, the clothes they were wearing.

It's done, of course, so the viewer/audience/reader can tell them apart from other animals or other people wearing the same outfit, if they're infiltrating and pretending to be someone else. It can also extend to the shapeshifter's voice, retaining their identifying vocal range, regional accent, and personal inflections regardless of whether their current body should be able to speak in that manner or not (sort of a non-malicious version of Voices Are Mental).

If these identifying cues become relevant to the plot, it will probably become a Glamour Failure.

Named after a not-so-popular hypothesis by biologist Rupert Sheldrake, in which the forms of organisms are imprinted upon "morphic fields", which in turn influence the forms of subsequent organisms (at least, before the term was hijacked by science-fiction authors to name this trope's concept), and for that see Lamarck Was Right. May be brought upon by being subject to a Forced Transformation. If the retained traits are indicative of an evil nature, see also Red Right Hand. See also Shapeshifter Default Form, and Shapeshifting Excludes Clothing. Contrast Fisher Kingdom.

While in her many animal forms, primarily the wolf one, Aisling's white fur and green eyes are carried over, as to show that it's her.

While in her many animal forms, primarily the wolf one, Aisling's white fur and green eyes are carried over, as to show that it's her.