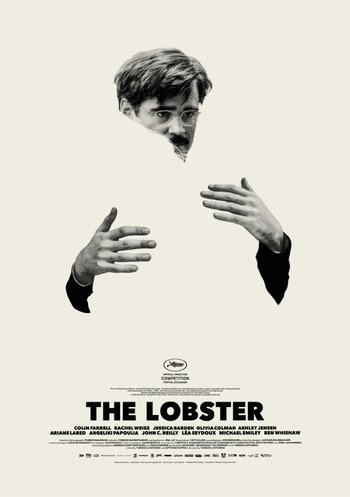 Just hope you won't get caught and eaten with butter.
Hotel Manager: Now have you thought of what animal you'd like to be if you end up alone?
David: Yes. A lobster.
Hotel Manager: Why a lobster?
David: Because lobsters live for over one hundred years, are blue-blooded like aristocrats, and stay fertile all their lives. I also like the sea very much.
Advertisement:

The Lobster is a 2015 absurdist romantic dystopian black comedy directed by the Greek director Yorgos Lanthimos as his English-language debut. It tells the story of a dystopian world where single people (known as 'Loners') are given 45 days to find a romantic partner before they are forcibly turned into an animal of their choice.

When David's wife leaves him for another man, he has to go to the Hotel, a place where single people are gathered together in the hope of finding a partner within their 45 days of stay. Usually, guests do this by finding someone with one shared attribute. During his stay, he attends dances, watches propaganda of how great a life of partnership would be, and socializes with a cast of troubled and somewhat eccentric characters who are looking for partners themselves. Occasionally, they all go into the woods and hunt for stray Loners with tranquilizer guns, as each captured Loner adds one extra day at the Hotel.