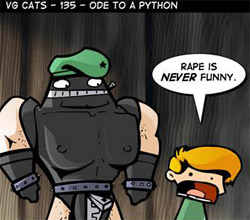 Except when this trope is in play. Maybe.
"They'll say: 'You can't joke about rape! Rape is not funny!' I say, fuck you! I think it's hilarious, how do you like that? I can prove to you that rape is funny. Picture Porky Pig... raping Elmer Fudd! Well, why do you think they call him 'Porky'?"
— George Carlin
Advertisement:

The whole point of Black Comedy is to find humor in otherwise depressing situations. When a good joke is made of a horrible thing, the darkness of the subject-matter gives it a unique strength and poignancy.

Given that sexual assault is as old as humor itself, it's unsurprising that it features in some of the oldest comedy known to us — though the consideration of sexual assault as punishment/a humourous come-uppance hasn't travelled particularly well, since modern audiences no longer find sexual assault funny in itself — modern audiences are generally far too aware of the immense pain of the subject matter to be amused by it, except when it and attitudes towards it are effectively satirised (e.g. the page quote, which we managed to agree presented a situation which was sufficiently ridiculous as to be funny for almost everyone).

A partial exception (depending on how well it's done) to the 'not inherently funny' thing we just said about sexual assault is the sexual assault of men (including, if not especially, by women). A big part of the humour is the idea that men shouldn't need help and aren't 'manly'/masculine if they ask for and/or get it — this 'meaning' (inverted commas) that being sexually assaulted as a man isn't just amazingly painful, especially if it's someone you know and/or trust, but also something one deserves if one is unwilling or unable to prevent it.

As a general rule, the best comedic material about sexual assault demonstrates a certain compassion and understanding (Sexual assault as largely a question of power/control rather than sex, having effects unique to each victim (sexuality, gender, species, etc. of perpetrator being irrelevant), having no influence on sexuality of victim or perpetrator, not being the fault of the victim, etc, etc) that the worst does not — in favour of a kind of sneering dismissiveness that hints at very real contempt — especially when it takes the form of deliberate mean-spiritedness and/or ignorance that highlights our own compassion and knowledge. More compassionate portrayals often happen to Butt-Monkey characters who are deliberately written as sympathetic; when confessing what happened to The Hero, they will immediately be offered sympathy and help, when confessing to a villain, they will more than likely be brushed off, to indicate the villain's Lack of Empathy.

See also Ass Shove (based on the same principles), Prison Rape (when played for comedy), Karmic Rape, and Memetic Molester (specific sub-tropes). Often overlaps with one of the Double Standard Rape tropes, as it's easier to laugh at a type of sexual assault considered less "serious" than a man attacking a woman. Compare Rape Portrayed as Redemption. Contrast Rape as Drama and Rape Is a Special Kind of Evil (since both tropes justifiably portray sexual assault as a bad thing).

Note: Skinship Grope is not Black Comedy Rape. Nor are the many, many varieties of consensual sex being used for comedy.

He then proceeds to go into a Broken Record routine to see how many times he can say "bummed in the face".

Rape of Men and Women by Men