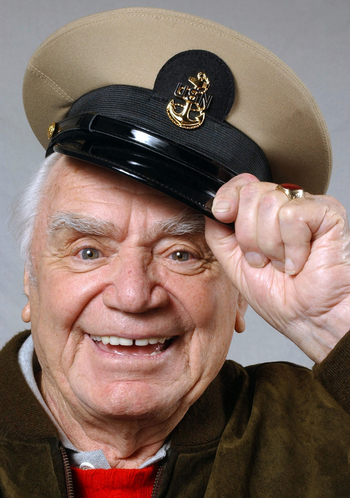 "Nightmare Fuel? Who, me?"
"Hey! Who stole my collection of used bandages? And they also got away with my nude pictures of Ernest Borgnine!"
— George Carlin
Advertisement:

His most famous film roles include the title character in Marty (for which he won an Academy Award) and Sgt. Fatso Judson in From Here to Eternity. His best-known television role was Dominic Santini in Airwolf. He also played the title character in the sitcom McHale's Navy, was a regular on Future Cop and The Single Guy, and made guest appearances in numerous other series including ER, Home Improvement, JAG, Little House on the Prairie, Magnum, P.I., 7th Heaven, The District, and Walker, Texas Ranger.

Around here, though, he is perhaps best known for his role as the Nightmare Fuel Station Attendant grandpa in Merlin's Shop of Mystical Wonders, and in one of the all-time great triumphs of celebrity licensing, his daughter produces a tie-in coffee soda named "Borgnine's". Oh, and he also provided the voice of Mermaid Man on Spongebob Squarepants, and appeared as himself in an episode of The Simpsons, if that interests you.