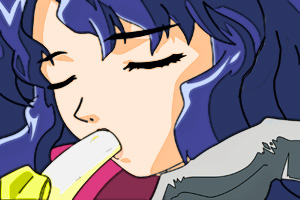 When a character eats something really slowly and suggestively, as a phallic or a yonic metaphor, or licks it or moves it in and out of their mouth in the same way. Bonus points for drips on mouth and/or chest.