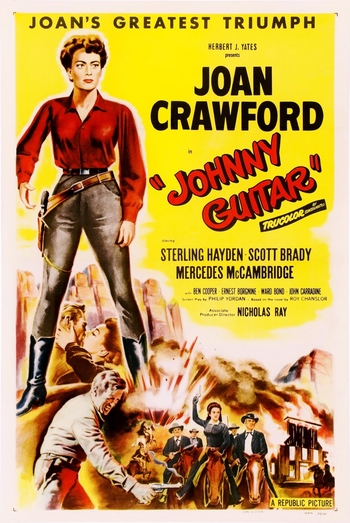 "What if you go, what if you stay, I love you
But if you're cruel, you can be kind, I know
There was never a man like my Johnny
Like the one they call Johnny Guitar"
— Title song performed by Peggy Lee
Advertisement:

Vienna (Crawford) is the owner of a saloon in a town in Arizona that's in a period of transition. A successful businesswoman, she is the object of envy by Emma Small (McCambridge), a cattle baron's daughter who loathes Vienna and the new level of influence she would have at the onset of a railroad that Vienna supports against the interest of the cattle owners. Things change for Vienna with the unexpected arrival of two men. The Dancin' Kid (Brady), the leader of a band of outlaws, who is accused of holding up a stagecoach and enjoys flirting with Vienna, the other is Johnny "Guitar" Logan (Hayden), a drifter with a guitar who is also an Old Flame that Vienna hoped to forget. The explosive relationships between the characters soon get out of control, plunging them into chaos.

Famous in later years for being an "avant-garde" Western, Johnny Guitar is known for its bright colours and visuals, its unusual set design, strong female protagonists and anti-authoritarian sentiments; rare for Westerns of The '50s. The theme song is also remembered for appearing in Fallout: New Vegas.