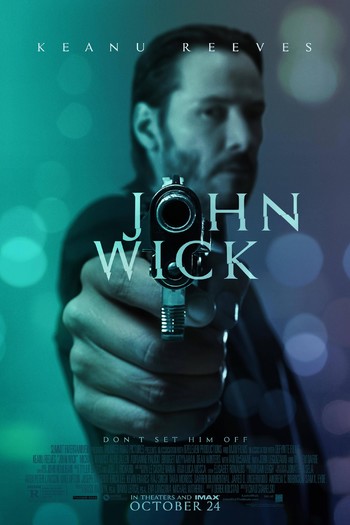 John Wick is about to shoot you.
"People keep asking if I'm back, and I haven't really had an answer. But now...yeah, I'm thinkin' I'm back!"
— John Wick
Advertisement:

John Wick (later retitled to John Wick: Chapter 1 in line with the sequels) is a 2014 action thriller film co-directed by Chad Stahelski and David Leitchnote Stahelski was the only one to be credited as director by the Directors Guild of America; Leitch was instead listed as a co-producer and starring Keanu Reeves.

A young gangster named Iosef Tarasov (Alfie Allen) and his friends break into the home of a man named John Wick (Reeves), who had earlier brushed off Iosef when he offered to buy Wick’s vintage 1969 Ford Mustang Mach 1. In the process, they steal the car, rough up Wick, and, most egregiously, kill the man’s dog.

Unfortunately, Iosef didn't know some very important details about John Wick — namely that he’s one of the deadliest men alive, a retired assassin formerly employed by Iosef’s mobster father Viggo (Michael Nyqvist), and the dog that Iosef killed was a last gift from Wick’s recently deceased wife. The break-in prompts Wick to come out of retirement and call in some favors in order to carry out a Roaring Rampage of Revenge.

Comparable to Kill Bill in premise and execution, John Wick is especially notable for its choreography, eschewing quick cuts and shaky cam in favor of long takes and minimal camera movement to showcase some truly spectacular fights and driving sequences that were almost entirely performed by Reeves. (Perhaps not too surprisingly, Leitch and Stahelski made their names as stuntmen and stunt coordinators.) The film also shows several strong influences from films like The Killer, Le Samouraï, and Point Blank (1967), meaning that the film is rife with brutal moves, badass One-Man Army moments, and Gun Fu that would make John Woo blush.

The success of the film spawned two sequels and several other spin-offs, and gave Reeves a new wave of stardom and recognition as a certified badass in ways not seen since the peak of the hype surrounding The Matrix. In other words, we're thinkin' he's back.