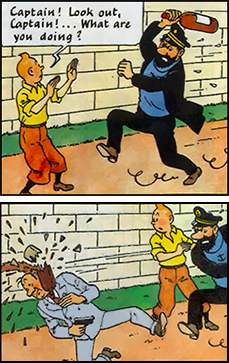 A mysterious character, sometimes a temporary ally or enemy, sneaks behind the protagonist. We see as they lift a knife, take careful aim at the hero, and strike.
Advertisement:

Only to see it wasn't the hero they struck, but a scorpion or snake poised to strike, or even an actual enemy. Either way, rather than killing the hero, the stranger has just saved their life. Sometimes, the target isn't even a threat but is used to gain trust, the message being "If I Wanted You Dead..., you would be by now".

Note that they aren't necessarily being sneaky about it—just less than straightforward. A hero cringing in fear or trying to reason with their ally happens just as often. Equally doable with a gun, or by throwing a knife which barely misses.

If misunderstood, it becomes a usual—if not outright mandatory—set-up for the Hero with Bad Publicity.

Only somewhat justified by the fact that telling someone there's a scorpion on them may cause them to panic, which in turn may make the scorpion panic and sting. And walking up to someone with a knife raised will have certain other implications, hence the sneaking.

If the characters know each other, the stabber may respond to any thanks they get with "I missed."

Can be parodied in more mundane series with a mosquito.