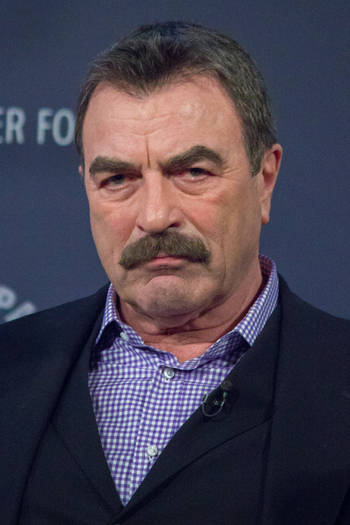 "I was planning to go into Architecture. But when I arrived (to sign up for courses) Architecture was filled up. Acting was right next to it. So I signed up for acting instead."
— Tom Selleck
Advertisement:

Thomas William Selleck (born January 29, 1945) is an American actor, director, producer, and political activist from Detroit, Michigan. His early career is filled with television commercials and minor roles as boyfriends, best friends, cowboys, cops, and lawyers. In 1980, he enjoyed his first big... no, make that frickin' huge... break when he was cast as Thomas Magnum in Magnum, P.I., a role he continued with until the series was cancelled in 1988. During his time on Magnum, he became one of the most bankable stars on television.

He was offered the lead role in a little film called Raiders of the Lost Ark, but in the end had to turn it down because the producers of Magnum wouldn't release him for other projects; the role of Indiana Jones ended up going to some guy named Harrison Ford.

After Magnum, he turned to film almost exclusively, appearing in Runaway, High Road to China, Mr. Baseball, Three Men and a Baby, and Quigley Down Under, a role that he considers his personal best. In 1997, the solidly conservative Selleck played against type to portray an openly gay reporter who has an affair with Kevin Kline in In & Out. These days he's mostly back to television, starring as NYPD Police Commissioner Frank Reagan in the regular series Blue Bloods and appearing in the Jesse Stone series of TV movies.

Selleck is an avid gun collector, and is a member of the NRA; which once led to an unfortunate incident on The Rosie O'Donnell Show where the very liberal Rosie deviated from their original topic of his current acting projects to roast him about his conservative politics, which, ironically, had more viewers siding with him than with her.note For the record, Selleck is not a republican. He is an independent. He lives on an avocado farm, which he operates himself, citing that he works "for less than anyone I can hire."