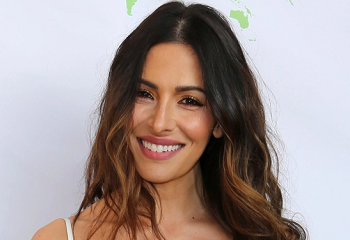 She's perhaps best-known for her scene-stealing roles in Person of Interest and The L Word, both shows which resulted in her being upgraded from a guest star to a regular. She also played the lead in Fairly Legal as Kate Reed, and has had many notable supporting roles in Film and Television.

She was married to fellow actor Steve Howey, and they have a son named William Wolf Howey, born in 2009 (necessitating her pregnancy being hidden on Life's second season) and twins Violet and Knox, born in March 2015. She and Howie filed for divorce in May 2020. Their divorce was finalized in January 2021. As of 2021, she is dating her costar on Sex/Life, Adam Demos.

In the morning after, Kate walks into Justin's kitchen to talk to him while wearing only his shirt.

In the morning after, Kate walks into Justin's kitchen to talk to him while wearing only his shirt.