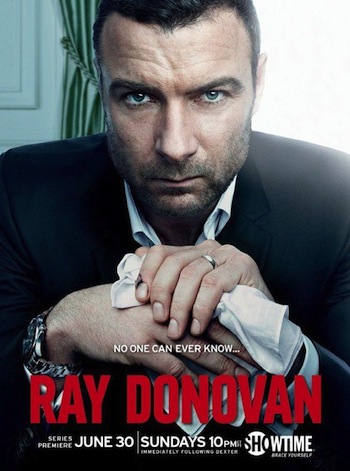 "We can fix this."
— Ray Donovan
Advertisement:

Ray Donovan is an American television crime drama series created by Ann Biderman for Showtime. The twelve-episode first season aired its premiere episode on June 30, 2013. The pilot episode broke records of viewership, becoming the biggest premiere of all time on Showtime.

Most of the series takes place in Los Angeles, where Ray Donovan (Liev Schreiber), who is originally from South Boston, is a ‘fixer’ for Goldman & Drexler, a powerful law firm that represents the rich and famous. However, he experiences his own problems when his father, Mickey Donovan (Jon Voight), is unexpectedly released from prison and FBI agents try to find him in order to bring down Ray and his associates.

The series relocated to New York City in its sixth season at the request of Liev Schreiber, who wished to be closer to his family.

Its seventh season finished airing in January 2020, and the series was cancelled a month later. Facing an an overwhelming response from fans and critics alike, Showtime announced a TV movie finale in February 2021. Titled Ray Donovan: The Movie, it aired on January 14, 2022.