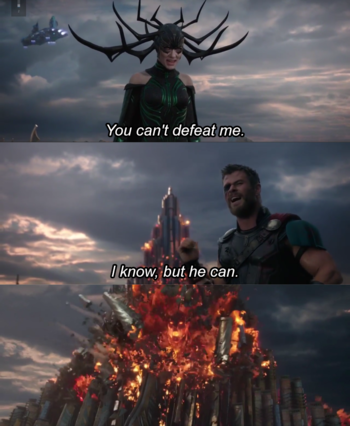 If you can't stop the apocalypse, might as well use it.
"Sometimes the best way to deal with a mad man is to send in another madman..."
— Angry Joe, Kickassia

There is Always a Bigger Fish, but sometimes they aren't willing to pop up out of nowhere and get you out of the current mess. That's where this trope comes in. Summon Bigger Fish is when you get another monster/god/whatever to fight the current one, and hope that once the smoke is cleared the one you called will leave you alone or at least be weakened enough by the fight to be taken out with less insane tactics. Sadly, the odds of this making things worse is 50/50 — Evil Is Not a Toy, after all — but then again, once you've crossed the Godzilla Threshold, anything is a viable option.

Remember, this has to be a conscious use of getting another monster. If it appears by accident, or by the monster's own choice, put that example in Always a Bigger Fish instead.

Named for a Running Gag in Darths & Droids.

Compare Mons, Awakening the Sleeping Giant, Did You Just Punch Out Cthulhu?, Give Chase with Angry Natives, Let's You and Him Fight, Enemy Mine. See also the Godzilla Threshold for examples of when Summoning Bigger Fish is pretty much the only option left.

Give into the madness, Spoony

The rest of the Kickassians decide to summon Dr. Insano to take care of their Critic problem.

Give into the madness, Spoony

The rest of the Kickassians decide to summon Dr. Insano to take care of their Critic problem.