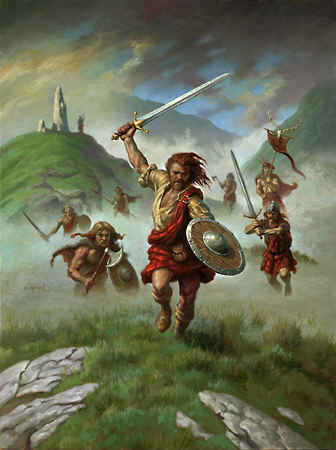 Better not beam these Scotties up.
Enthroned from the peak of her own highland mountains,
The spirit of Scotia reigns fearless and free
Her green tartan waving o'er blue rock and fountain
And proudly she sings, looking over the sea,
"Here among my mountains wild, I have serenely smiled
When armies and empires against me were hurled.
Firm as my native rock, I have withstood the shock
Of England, of Denmark, of Rome and the world."
— Scotland the Brave
Advertisement:

The Scottish people are stereotypically brave fighters. Thus, a Scottish accent is sometimes used to emphasize the boldness of fantasy warriors.

Violent Glaswegian is a more negative version of this. Often a characteristic of the Dwarves as well.

In the interest of preventing Zero Context Examples, please note that this trope is not about a character having a Scottish accent but rather about how the accent is used to convey bravery, physical/mental toughness, etc.